I am particularly interested at present in how the nanoscale spatial organization of chromatin is regulated during development to affect gene expression.

Background
I grew up on the Mid-Atlantic Coast of the United States with an abiding love for the outdoors and a fascination with things that live and grow.

As a undergraduate I studied Physics and Molecular Biology at Princeton, where I had the opportunity to experience lab research under the mentorship of Stas Shvartsman, who introduced me to my abiding interest in quantitative imaging and animal development.

I conducted my Ph.D. research under the guidance and unique inspiration of Michael Levine at UC Berkeley, where I studied cis-regulatory sequences that modulate the precision and robustness of gene expression (in particular shadow enhancers and paused promoters).

I was a postdoc in Xiaowei Zhuang‘s amazing single-molecule imaging group at Harvard, where I studied gene regulation through super-resolution microscopy, multiplexed, error-correcting imaging, and deep sequencing. 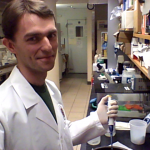 earch aims to improve our understanding of  how cells with the same genome can develop dramatically different behaviors.  For example, consider the mechanical abilities of a muscle cell compared to the electrical excitability of a neuron, or the industrious activity of bone building cells in a youthful person compared to an elderly one.  Each of these cells, (if taken from the same individual) has an identical genome — and yet each is “reading” a very distinct subset of that genome and consequently carrying out very different behaviors.  The choice of what to read and what to hide away is made during development.   An increasing body of data suggests this is accomplished by modifying the genome both in the nature of the proteins bound to different sequences and in the spatial organization of those sequences relative to each other.  The spatial organization or folding of the genome may be particularly important in complex multicellular organisms, since many of the sequences known to interact based on genetic data are nonetheless substantially separated from each other along the linear genome.  By regulating the folding of this linear sequence into a higher order structure, a cell might change which regulatory sequences have access to which genes, and achieve different behavioral states.

So far we have little imaging data on how the genome is folded within a cell on the length scale of individual genes, or whether this folding is regulated in any way relevant to the behavior of the cell.   Our limited knowledge stems largely from want of a method that has both the resolution and specificity to visualize such genomic substructure.  Conventional fluorescent microscopy has developed excellent tools for coloring specific regions of DNA and particular DNA-associated proteins with uniquely colored dyes — but lacks the resolution to turn these colored blurs into structures.  Electron-microscopy has substantially greater resolution but lacks compatibility with specific labeling techniques to tell different gene clusters or different protein types apart.  Super-resolution imaging approaches promise to address this balance by allowing the use of fluorescent labels while simultaneously resolving structures on the nano-scale.  I have been adapting this approach to uncover the nano-scale structure of chromatin and determine to how this structure changes when bound by different types of nuclear proteins.  While individual gene clusters appear as quite diverse structures, there appear to be a few general features, for example, linking structure with the epigenetic state.